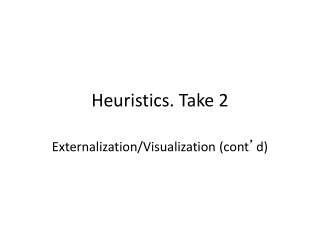 When They All Sound the Same: Cognitive Heuristics and Walk-In Advising - . marion schwartz division of undergraduate

Heuristics and Biases - . behavioral and experimental economics. making decisions under uncertainty. many decisions are

The Dangers of Heuristics and Biases in Audit - . james bone president global compliance associates, llc. the dangers of

By Rick Mercer with help from Object-Oriented Design Heuristics, Arthur Riel - Relationships amongst objects. by rick

OUTLINE - . questions? did you hear or notice anything since last class that has to do something with this class? go over