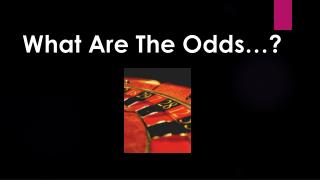 Making a Marketplace: A Checklist for Online Disruption - On november 13, 2012, bill gurley, a partner at benchmark

THE VIETNAM YEARS - . chapter 22. you can kill ten of my men for every one i kill of yours. but even at those odds, you

United State Absorption Rates and Odds of Selling as of April 2009 - . to learn how to calculate absorption rates for

Workplace Diversity Corporate Training Materials - . module one: getting started. every new beginning comes from some

CREATING HEALTHY SCHOOL ENVIRONMENT STARTS WITH YOU!!!! - . last out of the blocks lace untied……. the odds were