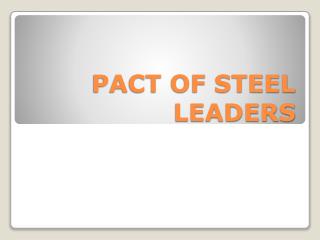 PACT OF STEEL LEADERS. LEVEL OF HAPPINESS WITH THE VERSAILLES TREATY: Felt Germany had been humiliated by the treaty; wanted revenge. HITLER. FAMILY WEALTH Middle class Father was a government official Mother was a housewife. HITLER. FIRST CAREER OR JOB BEFORE WWI pact - . a pact is an agreement between people or countries in which they promise to do certain things. describe a pact

INTEGRITY PACT - . what is integrity pact

PACT-WP3 - . jean-pierre birat, arcelormittal research, france bruxelles, 6 october 2008. menu. who are we? our

The Quality of Teaching Pact - . of the federal government and the länder governments of germany. background: he system