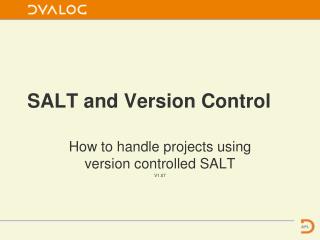 SALT and Version Control. How to handle projects using version controlled SALT V1.07. Reasons for external storage. Ever since large IT projects have been going on there has been a need to keep code out of the workspace and manage it, e.g. More room needed in the workspace Introduction to Version Control - . based on material at http://svnbook.red-bean.com/. the stages of developing a

Version Control - . introduction to subversion (svn). the idea of svn. various people could work on the same project you

Version Control - . …using git/tortoise git. by cp. what is version control?. “a system that records changes to a

How is salt extracted? - . c3 lesson 4. learning outcomes. all … will list the different ways salt can be extracted

Salt from Rock Salt - . what is this?. where does it come from?. what does it contain?. can you describe it?. salt from

Version Control - . why version control?. scenario 1: your program is working you change “just one thing” your