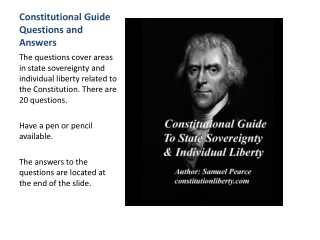 Constitutional Guide Questions and Answers. The questions cover areas in state sovereignty and individual liberty related to the Constitution. There are 20 questions. Have a pen or pencil available. The answers to the questions are located at the end of the slide. Question 1.