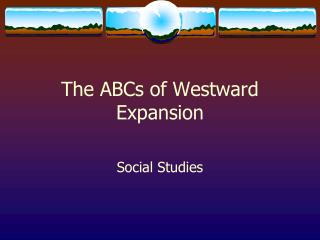 The ABCs of Westward Expansion

The ABCs of Westward Expansion. Social Studies . A is for Americans.

The ABCs of Westward Expansion

ABC’S of the Texas Revolution - . objective. objective : to identify, explain, and illustrate the people and places

The Era of “Good Feelings” - . -the treaty of ghent ends the war of 1812 *creates a brief period of nationalism

The Futurity First Opportunity - . today’s agenda. company overview how we help you build your business prospecting

What can ranch/farm families do to improve their chances of continuing as a family - Business for generations? lorne

Texas Revolution - . chapter 10. texas volunteers. joined the texas army because they had a desire for adventure and a

Famous Mexican-Americans in the USA - . alexis is a mexican- argentinian american and is most famous for her roles in

Cattle Unit - . ms russell. what you will learn:. breeds of cattle body parts of cattle cattle terms different types of

Westward Expansion and Genocidal Conflict With Native Americans - . war with the plains indians, 1851 -

Leptospirosis in Cattle - . by jennifer hopkins. “leptospirosis is a bacterial infection of animals that is responsible

The Texas Revolution - . causes of the revolt the texas revolution the aftermath. westward movement. americans

Opening Activity - . when people seek new opportunities, what do they leave behind? what challenges do people face when

Reasons Why People Volunteer - . to help their families to work with youth to learn new skills to help the community to