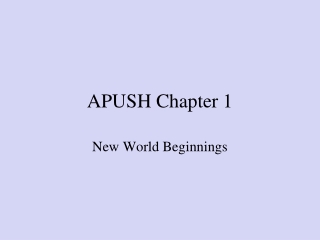 APUSH 1-1 - . bailey chapter 1. what is the significance of what we are looking at here?. what is special about this

APUSH Chapter 21 - . pg. 656-674. african-american leaders organize against racism. equality within the u.s. during the

APUSH Chapter 23 - The political machine. organized group that controlled theactivities of a political party in a city

Chapter 33 APUSH - . the great depression and the new deal. herbert hoover believed that federal government should not

APUSH – December 1 - . objectives: to continue to further your understanding of the themes and symbols within

APUSH 1-2 - . bailey chapter 2. how did the invention of joint-stock companies affect the colonization of the americas?.