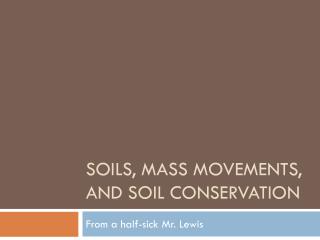 Soils, Mass movements, and soil conservation. From a half-sick Mr. Lewis. Soils. Soils are a result of weathering Without soil there could be no life on land Soil is made of loose, weathered rock, and organic material with which plants can grow Soil Formation and Mass Movements - . bellwork : pg. 143-145 how does water cause mass movements? how do earthquakes

Unit 3 Rocks, Soil, Erosion and Mass Movements - . including the geological history of north carolina!. classification of

Mass Movements - . weathering. weathering is the breaking down of rock into smaller fragments ‘in situ’. weathering

Mass Movements - . mass movement - the down slope movement of earth material under the influence of gravity. figure 10.3.

Soil Conservation - . improving the soil. if there are two types of soil degradation … soil erosion loss of fertility

Soil Conservation - . soil provides minerals and nutrients for plants. all animals get energy from plants, since all food

Soil Conservation - . section 3 ms. musich. activating prior knowledge. think of an area of land that has a wide are of

Soil Conservation - . i. value a. everything that lives on land depends on soil. 1. plants need soil to grow. 2. animals