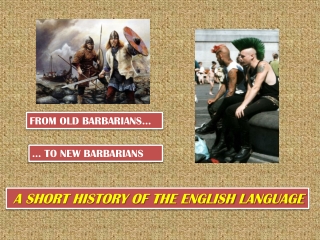 FROM OLD BARBARIANS…. … TO NEW BARBARIANS. A SHORT HISTORY OF THE ENGLISH LANGUAGE. SUMMARY. TIMELINE. BEFORE ENGLISH. 200 B.C. THE FIRST INHABITANTS OF THE BRITISH ISLES SPOKE CELTIC. THERE ARE CELTIC PLACE NAMES IN BRITAIN: AVON = RIVER, DOVER = WATER. English Literature: Unit 1 - . understanding prose 50% of total award. what is on the paper?. section a: literary

Old, Middle, and Modern English - . the history of the english language really started with the arrival of three germanic

Old English part 2 - . influence of other languages. latin influence ; due to the arrival of christianity which most text

Middle English Literature and Chaucer’s The Canterbury Tales - . part i: the anglo-norman period: 1066-1350 a.d. the