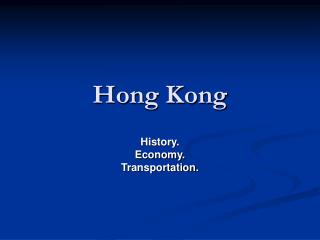 Hong Kong. History. Economy. Transportation. As victors of the Opium wars, the British acquired Hong Kong Island and it’s surrounding territories after a series of treaties with the Chinese in the mid 1800’s. Hong Kong’s geographical

HONG KONG - . jenny wong student id: c62086. hong kong is one of two special administrative regions of china, the other