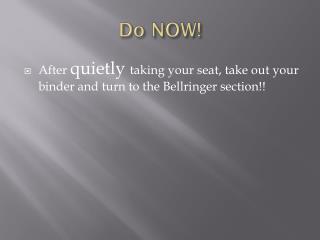 Do NOW!. After quietly taking your seat, take out your binder and turn to the Bellringer section!!. Bellringer !. What are the three regions of the first 13 colonies? What is one word you would use to describe how the colonists felt after England would pass a Navigation Act?