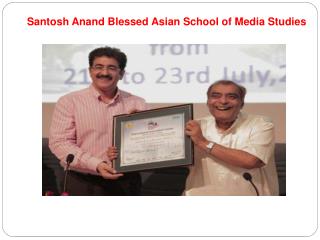 13 times nominee and 2 times recipient of film fare awards, titled with Rashtriya Kavi, the most respected lyrics writer and poet Santosh Anand said “ I love Asian School of Media Studies for its deep involvement with the world of art & artist” speaking during the orientation program of ASMS at Noida Film City. “It was a great honor and pleasure to handover the life time achievement award to Santosh Anand during 4th Global Film Festival Noida 2011. Every time he comes with the poems and lyrics full of emotional miracles” said Sandeep Marwah President of Marwah Studios. Santosh Anand has worked with all the top film directors and music directors of Indian Cinema. He is famous for many popular hindi film songs including Roti Kapra Aur Makkan, Kranti, Pyasa Sawan, Tringa, Surya Nagmani, Prem Rog, Junoon, Purab Aur Pachim and many others.

Presentation to the 8 th Annual Georgia School of Addiction Studies - . evidence based principles of offender

Who are New Zealand’s Asian People? - Psychosomatic symptoms in asian populations: more than a headache? presentation

Maila Camille B. Ani - . god has blessed you so much, and you have become a blessing to others, especially to your

Pan-awareness: Building a bridge between panpsychism and Vedanta - . anand rangarajan anand@cise.ufl.edu dept. of

CD and DVD Media - . chapter 10. overview. in this chapter, you will learn to identify variations of cd media technology