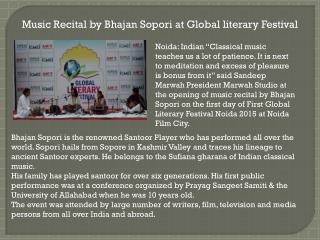 Noida: Indian “Classical music teaches us a lot of patience. It is next to meditation and excess of pleasure is bonus from it” said Sandeep Marwah President Marwah Studio at the opening of music recital by Bhajan Sopori on the first day of First Global Literary Festival Noida 2015 at Noida Film City.
Bhajan Sopori is the renowned Santoor Player who has performed all over the world. Sopori hails from Sopore in Kashmir Valley and traces his lineage to ancient Santoor experts. He belongs to the Sufiana gharana of Indian classical music.
His family has played santoor for over six generations. His first public performance was at a conference organized by Prayag Sangeet Samiti & the University of Allahabad when he was 10 years old.
The event was attended by large number of writers, film, television and media persons from all over India and abroad.

San Fermin Festival 2015 - Once again the san fermin festival is underway in pamplona, spain. dating from the 16th

Literary Terms - . you need to know all these terms before the state reading assessment. allusion. a reference in a

Mid Autumn Festival - . when is it. the chinese mid autumn festival is on the fifteenth day of the eighth moon(lunar

Literary Devices - . click here to begin program!. pick up where i left off !. main menu. learn about what a literary