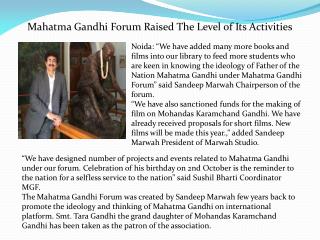 Mahatma Gandhi Forum Raised The Level of Its Activities

Noida: “We have added many more books and films into our library to feed more students who are keen in knowing the ideology of Father of the Nation Mahatma Gandhi under Mahatma Gandhi Forum” said Sandeep Marwah Chairperson of the forum.
“We have also sanctioned funds for the making of film on Mohandas Karamchand Gandhi. We have already received proposals for short films. New films will be made this year.,” added Sandeep Marwah President of Marwah Studio.
“We have designed number of projects and events related to Mahatma Gandhi under our forum. Celebration of his birthday on 2nd October is the reminder to the nation for a selfless service to the nation” said Sushil Bharti Coordinator MGF.
The Mahatma Gandhi Forum was created by Sandeep Marwah few years back to promote the ideology and thinking of Mahatma Gandhi on international platform. Smt. Tara Gandhi the grand daughter of Mohandas Karamchand Gandhi has been taken as the patron of the association.

Mahatma Gandhi Forum Raised The Level of Its Activities The Ultimate Glossary of Terms About - Water damage can happen in ways. in summary, it can be a very serious issue for a Corporate Social Responsibility - . role of npo- new professional opportunities with regard to csr obligation under

Tribal Populations in India - . over one hundred million indians belong to the indigenous communities known as adivasis

Channelization and Turn Bays - . island channelization. flush, paved, and delineated with markings – or unpaved and