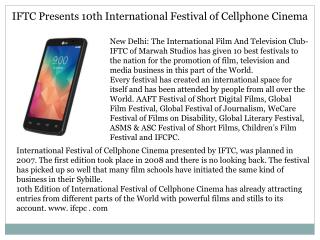 New Delhi: The International Film And Television Club-IFTC of Marwah Studios has given 10 best festivals to the nation for the promotion of film, television and media business in this part of the World.
Every festival has created an international space for itself and has been attended by people from all over the World. AAFT Festival of Short Digital Films, Global Film Festival, Global Festival of Journalism, WeCare Festival of Films on Disability, Global Literary Festival, ASMS & ASC Festival of Short Films, Children’s Film Festival and IFCPC.
International Festival of Cellphone Cinema presented by IFTC, was planned in 2007. The first edition took place in 2008 and there is no looking back. The festival has picked up so well that many film schools have initiated the same kind of business in their Sybille.
10th Edition of International Festival of Cellphone Cinema has already attracting entries from different parts of the World with powerful films and stills to its account. www. ifcpc . com

San Fermin Festival 2015 - Once again the san fermin festival is underway in pamplona, spain. dating from the 16th

Mid Autumn Festival - . when is it. the chinese mid autumn festival is on the fifteenth day of the eighth moon(lunar