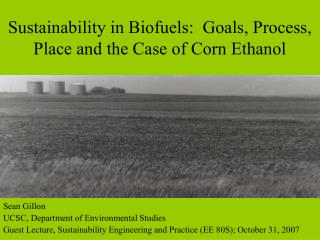 Sustainability in Biofuels: Goals, Process, Place and the Case of Corn Ethanol Sustainability in Biofuels: Goals, Process, Place and the Case of Corn Ethanol

CHAPTER 1 Environmental Problems, Their Causes, and Sustainability - . core case study: a vision of a more sustainable

Chapter 6 Where It Starts – Photosynthesis - . 6.1 biofuels. coal, petroleum, and natural gas are fossil fuels – the

Earth Sustainability - . sustainability: sustainable : rate at which a renewable resource can be used without reducing

Making the Case for Behavioral Health Integration into Primary Care: A Road Map to Success and Sustainability - . william

Question #1 - . assume that corn is produced in a perfectly competitive market. farmer roy is a typical producer of