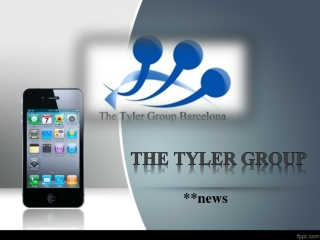 BARCELONA WELCOMES 'SMARTPHONES FOR THE MASSES' tyler group news It is nearly that time of year - when anyone who is anyone in the mobile world catches a flight to Barcelona to show their face at the Mobile World Congress. Austerity will be in the air this year and not just because of Spain's continuing economic crisis. Cheaper smartphones are likely to be on show as device makers look to new markets in the developing world to expand their presence. Powering these handsets will be new cheaper operating systems on show from the likes of Firefox and Ubuntu. People go to the Mobile World Congress - which runs from Sunday to Thursday - for a lot of things, but the number one draw is handsets. "It is the most prolific consumer device on the planet, everyone has an interest," said Ben Wood, principle analyst at CCS Insight. This year though he is not sure we will witness the flagship, signature phone launches that used to be a daily curtain-raiser for the show. "Apple has changed all that," he said. Always preferring to plough its own furrow and a famous no-show at the Mobile World Congress, Apple has started a trend for bespoke launches. Those handsets that are on offer are likely to be more modest than the iPhone. "They are not all going to be high-end £500 phones. This year, the Mobile World Congress will be all about smartphones for the masses," said Mr Wood. VIEW FOR MORE ARTICLES: http://www.youtube.com/watch?v=wzAkAGcr8xk http://www.good.is/the-tyler-group-barcelona tyler group news

BARCELONA WELCOMES 'SMARTPHONES FOR THE MASSES'

Mobile Apps For Missions - . iccm 2014. phone statistics. 83% of time on smartphones is spent using apps 50% is spent on

Smartphones in Healthcare - . mary eisenberg. some statistics…. according to manhattan research, the number of

Air Masses and fronts - . an air mass is a large body of air that has similar temperature and moisture properties

Smartphones - . lesson objectives. to understand and demonstrate an understanding of smartphones. what is a

Air Masses - . and how they control our weather. air mass. an air mass is a body of air with similar properties

Beyond Smartphones with raspberry pi - . by - ashish kshirsagar. need for thinking beyond smartphones. cell phones

Apartments in Barcelona - Bizflats stylish short-term apartments,lofts and villas in barcelona - including corporate

Barcelona Boutique Hotel - We provide the perfect and exclusive facilities only at barcelona boutique hotel, barcelona

Air Masses and Fronts: How are they related to storms? - . s.c. standard 6-4.4. air masses. huge bodies of air formed