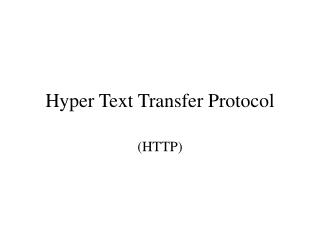 Hyper Text Transfer Protocol. (HTTP). HTTP. HTTP defines how Web pages are requested and served on the Internet Early servers and browsers used an ad-hoc approach A standardized protocol, called HTTP/1.0, was derived from this The earlier approach is now called HTTP/0.9 4.RL.1 - Refer to details and examples in a text when explaining what the text says explicitly and when drawing

PROCEDURE TEXT - . siswanf.com. 1. the definition of procedure text. it tells about the sequence step of how to make

What is TCP/IP - . transmission control protocol / internet protocol tcp and ip are two of the major network protocols of