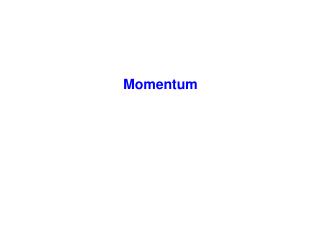 Momentum. I. Impulse-Momentum Theorem. Momentum 1. Defined. Momentum is defined as “mass in motion” Momentum is a vector (there is a direction associated with it). Momentum is a measure of both mass and velocity. As an object approaches the speed of light, its momentum increases dramatically. - According to special relativity, mass

Bellringer – 2 mins to hand in - . a 67kg ice skater is moving at a constant velocity of 10m/s when he collides and

Momentum - . what is momentum? p = mv how does momentum change? (impulse) ‏ i = mΔv = fΔt quiz ! conservation of

GYROSCOPE - . an overview presenter: muhammad khurram javed 2008-ep-17. gyroscope. what is a gyroscope? definition: a

CONSERVATION OF LINEAR MOMENTUM - . chapter 20. objectives. know that linear momentum is conserved when no outside forces

Section 6 – 1 Momentum and Impulse - . momentum (p). a vector quantity defined as the product of an object’s mass and

The World - . particle content. all the particles are spin ½ fermions!. schrodinger wave equation. he started with the