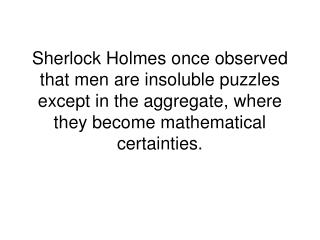 Sherlock Holmes once observed that men are insoluble puzzles except in the aggregate, where they become mathematical certainties. “You can never foretell what any one man will do,” observed Holmes, “but you can say with precision what an average number will be up to. Present Challenges and Future Directions for the Field of Learning Disabilities* - . margo a. mastropieri * paper

Do now – on a new piece of paper - . the diagrams below represent two types motions. one is constant motion, the other,

JCAHO A Constant State of Readiness - 2 nd annual ellison pierce symposium positioning your ors for the future. jcaho a

Warm Up - State whether each word or phrase represents an amount that is increasing, decreasing, or constant. 1. stays

“Truly creative thinking, of course , will always remain beyond the power of any machine.” - . creativity and ai.

What Title I Requirements Remain in the Land of the Waiver Initiative? - Leigh m. manasevit, esq. lmanasevit@bruman.com

Resistance - . electrostatic interaction. fluid friction. a constant force leads to a constant current. no voltage. i=0.