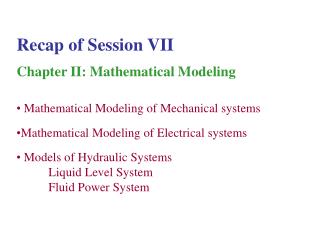 Recap of Session Two - . question: is there a supreme being? why? answers: every effect has a cause every creation has a

Recap of Class - R210a spiritual formation lawrence pascual. recap of class. introduction. according to the outline given

Recap… - . we need to take spread into account when we give an interval for the population parameter. so far….

Recap - . main recommendations for mauritius and way forward. harmonising with existing national plans and link with

Session VII: The Programme Cycle - Session objective. to provide an understanding of the technical cooperation programme