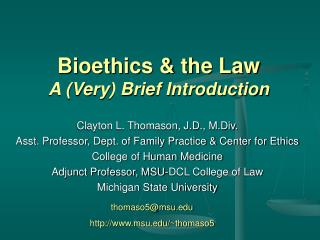 Ethics &amp; Bioethics - . what is

Ethical and bioethical issues - . ethical and legal issues introduction. as a member of the health care team, the nurse

Bioethics Defined - . the study of ethical and moral issues related to the practice of medicine the study of moral PRINCIPLES OF BIOETHICS - . “what principles guide the health professional in interacting with patients/clients?.

CATHOLIC BIOETHICS : THIS IS MY BODY - . andrew trew st. mary seminary atrew@jcu.edu the right to life is a human