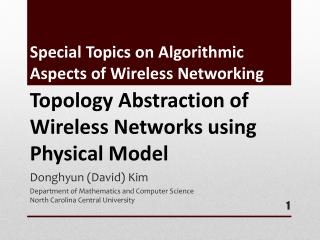 Wireless and Mobile Computing and Networking at the University of Florida Technology, Infrastructure &amp; Research

Algorithmic Game Theory and Internet Computing - Algorithms for the linear case, and beyond …. algorithmic game theory

Welcome to Fluke Network’s Wireless Networking Workshop! - . who are you? who is fluke networks? why bother with this