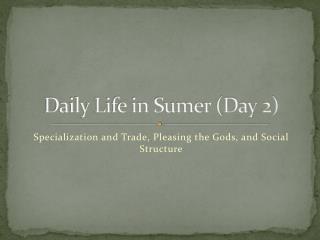 Daily Life in Sumer - . do now. what are some laws you can think of? why are laws created? who do they protect?. life in

Chemicals in our daily life - The changes that we see around us in our world are caused by many chemical reactions.

Daily Life in Ancient Sumer ( Making a Comic Strip ) - . students will be able to read, draw, and write about the daily

Daily Life in Athens - . public life. boys who lived in athens in ancient greece understood that they were the ones who