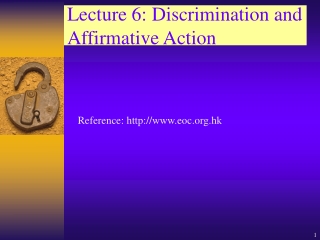 Lecture 6: Discrimination and Affirmative Action. Reference: http://www.eoc.org.hk. 1.What is Discrimination in employment?. -When the decisions on hiring, promotion, pay, fringe benefits and other terms and conditions of employment directly affect the economic interests of employees. Affirmative Action - . disclaimer. this presentation does not imply any racial agenda or discrimination. the views that

Federal Affirmative Employment (Are We There Yet?) - . defining “there”. title vii of civil rights act: achieving an

Who are the true beneficiaries of affirmative action - . by muriel mushariwa university of witwatersrand. muriel

Hiring and Promoting with Affirmative Action Goals in Mind - . presented by: department of mental health and addiction

‘Race’, Difference and the Inclusive Society - . anti-discrimination law, affirmative action and the pursuit of equal

AFFIRMATIVE ACTION FOR SCs/STs - Assocham initiative : the associated chambers of commerce and industry of india, new