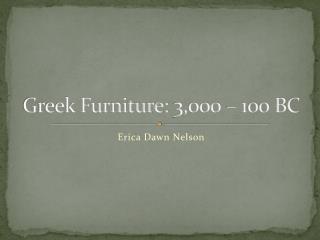 Greek Furniture: 3,000 – 100 BC. Erica Dawn Nelson. Greek Furniture. Ancient Greek furniture was very basic. Homes tended to have little in the way of furniture. Couches and stools were the main pieces, along with chests for keeping valuables. http://www.happyhomefurniture.co.in/ - If you are looking for furnishing your home with quality and affordable furniture

It’s Greek to Me - . ΜΕΡΥ ΜΠΑΑΜ. click on the link above to see your name in greek. it’s greek to me.

A look at the important facts of Kingstown Furniture - A house looks empty without furniture. the first thing that your

Home and Office Furniture and Decor Trends To Watch For In 2018 - Http://www.nwmrentals.com/ corporate furniture