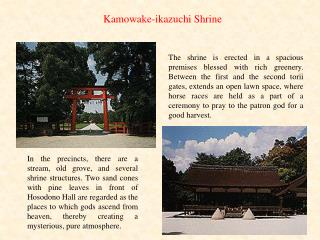 Kamowake-ikazuchi Shrine. The shrine is erected in a spacious premises blessed with rich greenery. Between the first and the second torii gates, extends an open lawn space, where horse races are held as a part of a ceremony to pray to the patron god for a good harvest. Dragon Shrine Slots - The dragon shrine slots capabilities playing cards and gemstones as the most common symbols. of

Visiting a Japanese Shrine - Inside the main pavilion, we find the ship ( gejin ) and the area of the altar ( naijin ).

The Yasukuni Shrine in Tokyo - . understanding and transforming chosen traumas and glories tatsushi arai. what is

The Shrine Down the Hall - . poetry writing &amp; the new york times. i. generating raw material: self . ice breaker.

Help Us Build the Rosary Shrine - . a rosary path on 20 acres... please

SHRINE OF BIBI MASUMA-E-QUM Iran - The daughter of the 7th imam, the sister of the 8th imam, and the aunt of the 9th imam