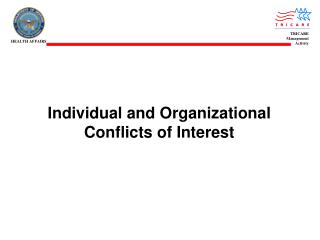 Individual and Organizational Conflicts of Interest Individual and Organizational Conflicts of Interest

INVESTIGATORS’ CONFLICTS OF INTEREST AFFECTING RESEARCH - . avoiding adverse consequences by disclosing, and then

Dealing with Conflicts - . a useful p.u.r.p.l.e. people skill!. what is a conflict?. a conflict is a disagreement between

Resolving Conflicts - . in this lesson, you will learn about… why conflicts occur. what to do if you are not getting

NO CONFLICT OF INTEREST TO DECLARE - . j.m. mclenachan, leeds. primary pci for stemi is a 24 / 7 service sustainable?.

Importance of Conflict Management Skills - . “as managers we spend about 21% of our time dealing with conflict.”.