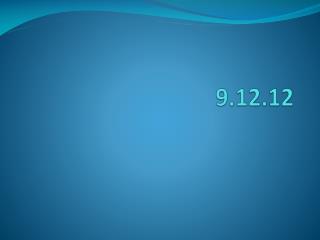 9.12.12. Before the Bell. Enter QUIETLY Take a seat BEFORE THE BELL RINGS Turn to Pg 36 in notebook and begin Warm-Up. Warm-Up. Open your notebooks to Pg 36 Make a list of EVERYTHING that you can think of that is dependent on the Sun THINK HARD!. Classroom Culture. Not good enough