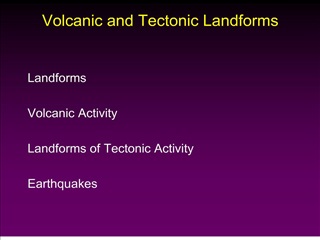 How do Plate Boundaries Affect Landforms? - . i will be able to identify landforms associated with different plate

6-3 Volcanic Landforms - Volcanoes- course 2. 6-3 volcanic landforms. vocabulary. caldera- the large hole at the top of a

Landforms at plate margins- volcanoes and supervolcanoes - . learning objectives: to know why people continue to live

3.4 Volcanic Landforms - . objectives: list the landforms that lava and ash create explain how magma that hardens beneath

7.4 Volcanic landforms - . key concepts: what landforms to lava and ash create? how does magma that hardens beneath the

Landforms - . landforms created by plate motion. massive, slow-moving tectonic plates have so much force they can build

Volcanic Landforms - . landforms from lava and ash. rock and other materials formed from lava create a variety of

Chapter 6 – 1 Volcanoes and Plate Tectonics - . what is a volcano?. a volcano is a weak spot in the earth’s crust

Volcanoes and Plate Tectonics - . volcano: a weak spot in the crust where molten material or magma comes to the surface

Volcanic Landforms - . key idea: the shape of a volcanic landform is determined by the materials produced during an

The Relationships Between Plate Boundaries and Tectonic Landforms - . the earth’s surface is covered with a variety of

Tectonic Activity and Hazards - . cameron dunn chief examiner. 1.the specification. there are four themes to cover in the

9. one of the most catastrophic of natural phenomena is a volcanic explosion so violent that it destroys the entire central portion of the volcano vast quantities of ash and dust are emitted and fill the atmosphere for many hundreds of square kilometers around the volcano only a great central depression, named a caldera, remains after the explosion

31. an important environmental hazard often associated with a major earthquake centered on a subduction plate boundary is the seismic sea wave, or tsunami a train of these water waves is often generated in the ocean by a sudden movement of the sea floor at a point near the earthquake source the waves travel over the ocean in ever-widening circles, but they are not perceptible at sea in deep water