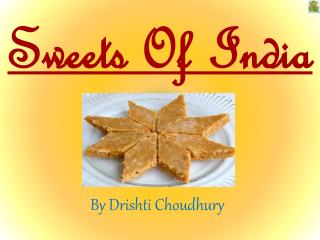 Sweets Of India. By Drishti Choudhury. Sweets are some of the most important things in life to an Indian – apart from engineering/medical school, politics, Bollywood films, and cricket matches, that is.

Sweets India - Sweets define happiness and give you the pleasure of having fun and celebrating your precious moments.

Online Sweets Delivery in India - If you want to send online sweets in india than come to our web portal indiagift.in. we

Buy Sweets Online in India - Foodebaba offers you to buy the best sweets, namkeens and several variety of bakery items at

SWEETS - . a candy, a sweet, a lollipop have you many i hope? they are so colourful green, purple, white and yellow that

Send Rakhi with Sweets in India - The idea of giving a surprise of delectable sweets to the sweet lover brother is great!

sweets - . les violettes de toulouse. violets of toulouse are made from cool flowers of violets crystallized in the

Sweets - . researched by nick patterson. project. asked the general public a series of questions about there favourite

Sweets Retailers in India - MM Mithaiwala - Mm mithaiwala is a traditional sweets and farsan shop based in malad, mumbai.

Buy Sweets Online India from Ghasitaramgifts.com - Ghasitaram gifts is a best online sweets shop in mumbai that offers to

SWEETS - . 1 st grade money problems. jane wants to buy this cookie for 33 cents. which set of coins does she need?. how

Varieties of Diwali sweets - If you like to have indian sweets and dishes, then visit sangeetha restaurant in homg kong

Indian Sweet Recipes- Send Sweets to India - Send sweets to india to your family and friends and make them smile. sweets

Best Traditional Sweets in India - MM Mithaiwala - Mm mithaiwala is an iconic sweet shop in mumbai. we prepare and market