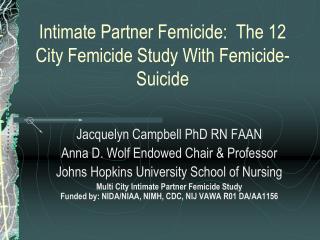 This study was funded by Hospira Inc. - Monitored anesthesia care with dexmedetomidine: a prospective, randomized,

Consciousness and Psi Can Consciousness be Real? - . a presentation for utrecht ll: charting the future of parapsychology

All We Know of Heaven by Jacquelyn Mitchard

Violence Against women and the word “ Slut ” - . slut stereotype. slut noun 1. an immoral or dissolute woman;

Risk Assessment for Umm Qais Archaeological Site - . this study was prepared during a master course in preventive

Domestic Violence Homicide Reviews: Preventable Deaths of Women in Australia - . when viewed as the escalation of a

‘If only we’d known’: what a small sample of femicides tells us about responses to domestic violence - . linda