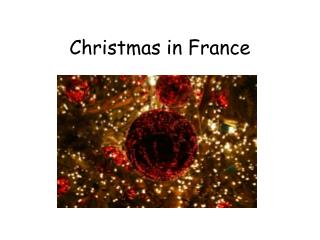 Christmas in France. Christmas Holiday. The 25th December is a public holiday in France, as it is in Britain. However, Boxing Day on the 26th is not a holiday, because it’s an English, not French, tradition. So everyone goes to work! . ?.

Christmas in France - . christmas in france kids have an advent calendar . from december 1st to decembre 24th, they eat a

Christmas around the world - . colin and t ara. japan. they always have a big parade with their friends and family. china

Fr Christmas in France - . in france they don’t have there presents on christmas day. they have them on christmas eve.

Life in New France - . what was new france?. new france was the area colonized by france in north america. it started in

Christmas in Poland - . marta kościelniak kl. 4a. christmas is the most popular family holiday in poland. it is a very

Invasion of France and the Battle of Britain - . german aggression 1933-1939. the road to france. voice from the past.

Christmas in Poland - Advent christmas in poland is preceded by advent, the period of preparation for the celebration of