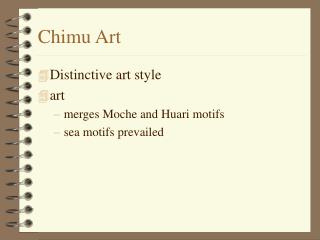 “A Very Old Man With Enormous Wings” - . gabriel garcia marquez . do now:. write half a page on your culture. what

How do the motifs of the horizon, the pear tree and the bees factor into Janie’s leaving? - Chapter 4: long before the

The Rise of the Inca Empire - . location . at its height, the inca empire stretched almost 2,500 miles it reached the

The Word of God Grew Mightily and Prevailed Acts 19:20 - . techniques of the world:. give the customer what he wants.

Artifacts of Mesopotamia - . bulla- a container used as a recording source. the item has to be sealed within the

Art of the Warli Tribe of Western India - Where do the warli live?. important facts. for centuries, warli painted on