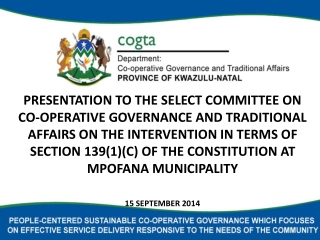 PRESENTATION TO THE SELECT COMMITTEE ON CO-OPERATIVE GOVERNANCE AND TRADITIONAL AFFAIRS ON THE INTERVENTION IN TERMS OF SECTION 139(1)(C) OF THE CONSTITUTION AT MPOFANA MUNICIPALITY 15 SEPTEMBER 2014. PURPOSE.

Bidding on a Remodeling project - . area, perimeter, volume: lesson 1. in this project we will:. calculate area of