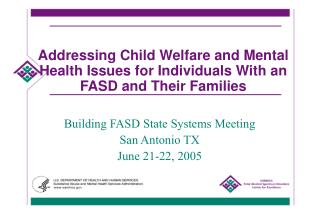 Module 4 - Engagement and intervention with parents affected by substance use disorders, mental disorders, and

Building a Collaborative Partnership to Address Fetal Alcohol Spectrum Disorders - . “putting the pieces together for Identifying and Preventing Fetal Alcohol Spectrum Disorders (FASD): - A hidden cause of relapse in women as well as

Work With Families Family and Child Welfare - Family welfare and protective services as a method of family practice. when

Addressing Child Welfare and Mental Health Issues for Individuals With an FASD and Their Families - . building fasd state