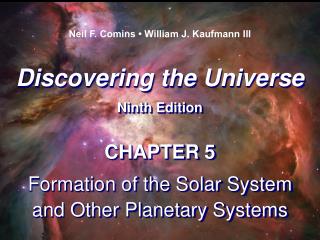 Neil F. Comins • William J. Kaufmann III. Discovering the Universe Ninth Edition. CHAPTER 5 Formation of the Solar System and Other Planetary Systems. A montage of the planets in our solar system presented in correct relative sizes. The orbits in the background are also drawn to scale. Electronic Commerce Ninth Edition - . chapter 4 marketing on the web. learning objectives. in this chapter, you will