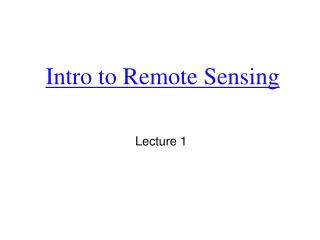 EE 543 Theory and Principles of Remote Sensing - . reflection and refraction from a planar interface. outline. reflection

Geography Review - . irondale high school is located about a mile away from the mermaid is an example of its… .

Remote Sensing of Snow Cover - . with slides from jeff dozier, tom painter. topics in remote sensing of snow. optics of