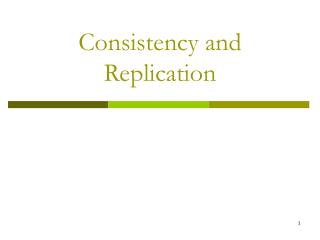 Consistency and Replication. Why Replicate Data?. Enhance reliability . Improve performance . But: if there are many replicas of the same thing, how do we keep all of them up-to-date? How do we keep the replicas consistent ? Consistency can be achieved in a number of ways.

Replication of DNA - . biology standards 5 a and b. phosphate. po 4 makes up a part of the dna/rna backbone. sugar. in

Consistency - . an estimator is a consistent estimator of θ, if , i.e., if converge in probability to θ. . theorem. an

Consistency and Replication - . replication of data. why? to enhance reliability to improve performance in a large scale