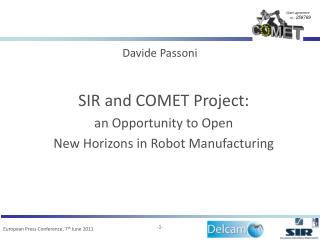 SIR and COMET Project: an Opportunity to Open New Horizons in Robot Manufacturing Davide Passoni. SIR and COMET Project: an Opportunity to Open New Horizons in Robot Manufacturing. Agenda. Who I am SIR S.p.A. The Market of Robot Manufacturing COMET Objectives = SIR Needs COMET and SIR’s Technology The Role of SIR in Comet What We Are Doing and What We Will Do

SIR and COMET Project: an Opportunity to Open New Horizons in Robot Manufacturing

Karel J Robot - . a gentle introduction to the art of object oriented programming lesson 2a. primitive instructions and

Flexible Manufacturing Systems (FMS) - . what will be covered. flexible manufacturing is defined how “you” can use

Risk and opportunity Part 1 - . tor stålhane torbjørn skramstad. contents of part 1. what is risk and what is

Robot Vision - . exercise. the task. robot co-ordinate system. to locate the picking point of the object = centre of

Sumo Robot - . from ground zero to competition. robot chronology . from the first use of the word “robot” in a

ROBOT KINEMATICS - . purpose: the purpose of this chapter is to introduce you to robot kinematics, and the concepts