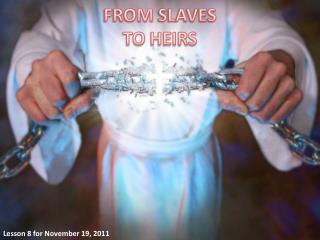 FROM SLAVES TO HEIRS FROM SLAVES TO HEIRS

Origins of American Slavery - . from indentured servitude to inherited permanent status of slavery. origins of laborers

Complete RENEWING YOUR PASSION FOR SPIRITUAL LIVING Romans 8:14-17 - I.  to live passionate spiritual lives, we must

What are We Celebrating at Christmas? Galatians 4:4-7 - . #1 god’s sovereignty. galatians 4:4. but when the fullness of

The Word Is Alive Galatians - . introduction narrated by tony gillon. author and title. the first word of the letter to

Galatians 3:27 for all of you who were baptized into Christ have clothed yourselves with Christ. - Romans 13:14 rather,

Galatians 1:3-5 - Grace to you and peace from god the father and our lord jesus christ , who gave himself for our sins,

Slaves - . by seneca. what is seneca trying to do?. seneca is challenging his readers to consider slaves in a humanistic