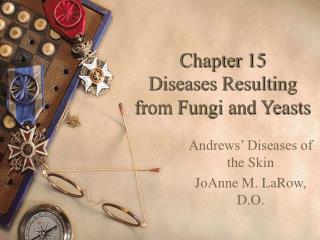 Yeasts - . yeasts are fungi that grow as unicellular cells producing daughter cells asexually either by budding or by

Diseases Caused by Fungi (Including disease by ‘lower fungi’) - . what are fungi?. fungi are small, generally

Chapter 29 Fungi - Introduction. fungi are the master decomposers and recyclers in terrestrial ecosystemssaprophytes:make

Chapter 22 Fungi - . biology ii – loulousis . 22.1 characteristics of fungi. fungi grows in one place until its food

Chapter 22 Fungi - . mycology – is the study of fungi characteristics of fungi: fungi are eukaryotic – have

Chapter 30: Fungi - . kelsey and kendra. what is a fungus?. fungi have absorptive heterotrophy and chitin in their cell