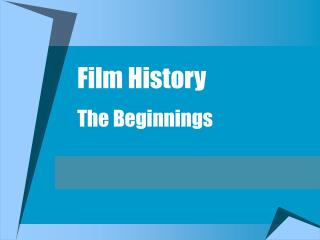 Film History. The Beginnings. Three Ways to Look at Film History. Business. Art. Technology. Inventors. Early film is a result of inventors, not artists. Persistence of Vision. The ability of the brain to retain an image a split second longer than the eye actually sees it.

History of Film - . from stage to screen. film. before the invention of television peter mark roget persistence of vision

History of Film - . by: larisa ashton. celluloid. a transparent and pliable film that could hold a small layer of

A short History of Gothic Horror Film - . origins of gothic horror film. originated in the genre of gothic literature