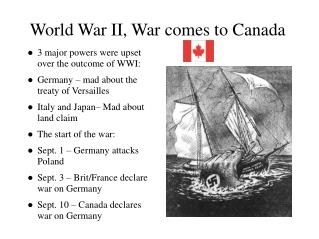 World War II, War comes to Canada. 3 major powers were upset over the outcome of WWI: Germany – mad about the treaty of Versailles Italy and Japan– Mad about land claim The start of the war: Sept. 1 – Germany attacks Poland Sept. 3 – Brit/France declare war on Germany

Canada in World War One - . canada enters the war. &quot;it is our duty to let great britain know and to let the

WWI and WWII - . african canadian roles. what was wwi?. it was known as first world war, the great war, and &quot;the

Canada’s Total War - . world war ii. this war involved most countries in the world as full, participatory combatants in

Canada and Politics : 1920s - . canadian history. end of the war. what was canadian politics like at the end of world war

The United States and Canada - . part 6 terrorism. the world’s lone

Internment of Japanese Canadians During World War II - . chc2d8 ms. gluskin. what is your opinion?. is discrimination

The Beginning of World War II - . the gathering storm the invasion of poland the miracle at dunkirk operation catapult.