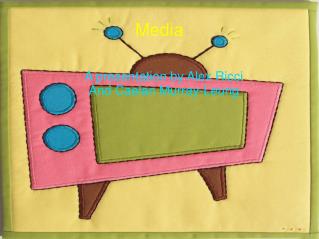 A presentation by Alex Ricci And Caelan Murray-Leung. Media. Key Terms. Here are some key terms you should understand before we start our presentation. Vertical Integration. vertical integration Media, Media, Media - . and textbooks. a few observations about film:. preview any film with the eye of a student when

Media - . 1.4 societal influences. what do we mean by the term “media” ?. definition: “a means of communication

Media - . “the 4 th branch of government”. in this chapter you will learn…. what is the role (function) of the

Media - . we will be working with 4 types of media in this lab. one type is put in a petri dish the other three types are

Media - . journalism the “first rough draft of history” – philip graham. what in the world is media?. political