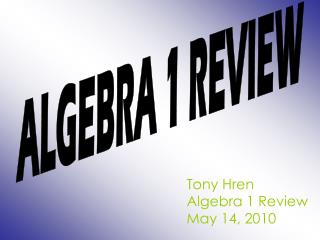 ALGEBRA 1 REVIEW. Tony Hren Algebra 1 Review May 14, 2010. Addition Property (of Equality). If the same number is added to both sides of an equation, the two sides remain equal. Example: If a=b, then a+c = b+c. Algebra 1 Review - . you will get off to a great start in honors algebra 2 if you take the time to practice and really

Algebra Review - . the language of algebra. miss jones is planning on going to paris. every week, she puts a certain