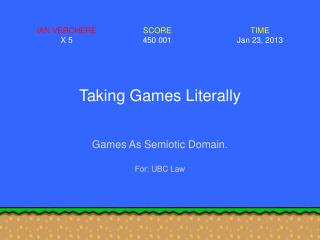 What is evolution? - . slow, gradual change over time. just in the last few million years, hundreds of species have

Creative Ideas for Adult Sabbath School - . 25 ideas you can use to build a dynamic sabbath school. 9. ideas about

Book Review on Hatchet - . by:cal. a hatchet is a type of ax. here is an example of a hatchet. what brian built to

Wreck It Ralph - . ideas: 2 weeks prior: “ralph is coming to wreck it!” watch him in action on [date, time, location

Building One Another UP With Our Words - . paul’s post card to philemon generally speaking we c an d o two things with

Their Eyes Were Watching God - . notes on folklore. “where i’m from” by digable