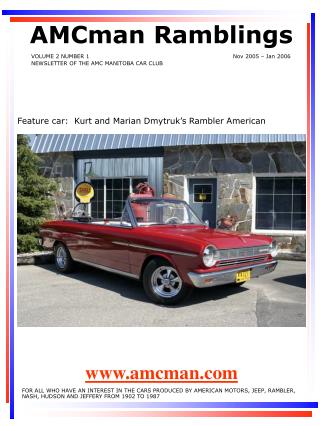 VOLUME 2 NUMBER 1 Nov 2005 – Jan 2006 NEWSLETTER OF THE AMC MANITOBA CAR CLUB. AMCman Ramblings. Feature car: Kurt and Marian Dmytruk’s Rambler American. FOR ALL WHO HAVE AN INTEREST IN THE CARS PRODUCED BY AMERICAN MOTORS, JEEP, RAMBLER, Ramblings in Endocrine Biochemistry - . pete wood. to “ramble”. “to go as fancy leads” “to wander in mind or

Ramblings Into The Celtic Thicket

Ramblings of a Chief Executive - . paul lankester february 2012. agenda. the journey the role as i thought learning by

Twitter, Big Data, and Other Ramblings - . robert dittmer. perspective on those v words. volume- 1% of the twitter stream

Ramblings of a paranoid part 7 - . pete hickey. what is the value of your pc?. lets try to find whose pc is worth the

Ramblings from a 40 something year old woman - I woke up this morning feeling rather determined. i wake up motivated