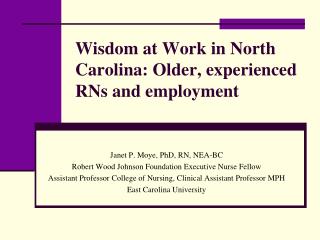 North Carolina Graduation Project - . an overview of the gp process at whs. what is the purpose of the gp?. promotes the

“If wisdom comes with age, we should work at embracing the experience.” - . what is an institute for learning in

Volunteering for the over 50s as a way into employment - . lyn winter north devon voluntary services. presentation. where

North Carolina Symbols - . ashley purgason. this is the state flag. you can see it hanging in the gym. north carolina has