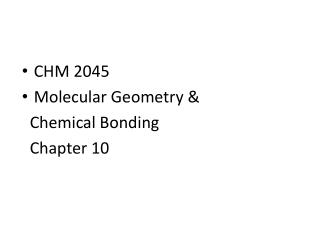 CHM 2045 Molecular Geometry & Chemical Bonding Chapter 10. Using Lewis Theory to Predict Molecular Shapes. Lewis theory says that these regions of electron groups should repel each other This idea can then be extended to predict the shapes of molecules